This is a sponsored article published in partnership with Galaxy Fusions...

Synaesthetic artist, Lucy, has a secret superpower: she sees the world in a different way from the vast majority of us...

While most of us experience colour visually, around four per cent of the world's population experience hues through multiple senses, like sound or taste. These people have a neurological condition referred to as synaesthesia, which means their brains process stimulation in a way that allows them to experience several senses all at once!

It's understandable, then, that many of these lucky people use their condition to create art.

The new Galaxy Fusions range, with its adventurous flavour combinations, promises a real treat for the senses, and to put this to the test we invited Lucy to visually express how she felt after eating each of the flavours: Blonde Chocolate with Sea Salt, Dark Chocolate with Raspberry Meringue, and Dark Chocolate with 70% Cocoa.

Of course, the results were spectacular...

"Living with synesthesia is wonderful, it feels like a sixth sense," Lucy says in the video. "When I taste something there’s a bit of visual mentally, but it’s not something that I can see with my eyes. And when I hear a certain word or a certain sound, that will be interpreted as a taste or a certain colour".

She explains that if a car was to drive past and blare its horn, she would see that as an explosion of a powdery pink colour. 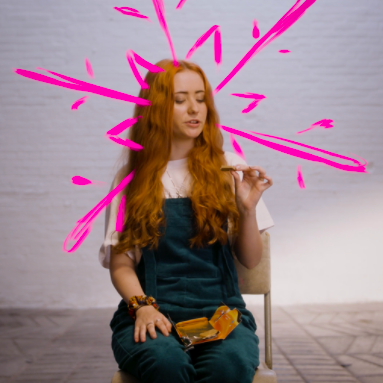 And it only made sense to incorporate her synesthesia into her artwork. "It was a no-brainer," she says. "It’s a way that I can communicate with other people to show them how I can see the world."

We all know that Galaxy chocolate is delicious, but Lucy proves that indulging in the new Fusions flavours really is a treat for the senses...

When she tastes the Dark Chocolate with Raspberry Meringue flavour, she describes that "it invokes a real sense of this dark, rich, velvety brown colour. But there are also notes of teal and burnt orange, as well as tinges of pinkish red."

Blonde Chocolate with Sea Salt, on the other hand, was "a lot of confetti, a lot of action. So there’s a lot of flecks from all across the colour spectrum. There’s a lot of happiness going on. It’s almost like a feeling of laughter."

Finally, Lucy tasted the Dark Chocolate with 70% Cocoa. "It's a real deep, rich red burgundy colour," she exclaims. "There’s a lot of different notes within the Burgundy, and it feels really satin-like. Reminiscent of what it’s like to be calm."

It's not hard to see why Lucy champions her synaesthesia. "It’s different to what other people experience, but certainly like a little secret superpower," she says.